8 Different Toasts From Around the World

Toasting is an ancient tradition which connotes celebration and good times. Today toasting remains an important practice in many cultures around the world. But when did we start to toast?

One theory dates the art of toasting to the Ancient Romans who ‘toasted’ their drinks to deter would-be poisoners. Before every sip of their drink, companions would smash their goblets together. The idea was that by smashing some of your drink into your companion’s mug you ensure both of you die if either drink contains poison. This practice would, in theory, deter a poisoner from spiking their companion’s drink.

A second theory proposes that the act of ‘toasting’ stems from actual toast. In the 17th century, popular practice encouraged the addition of spiced toast to unsatisfactory wine. However, many consider the link between filling a wine glass with soggy toast, and ‘toasting’ as we practice the term, a tenuous connection at best.

Another theory suggests the practice of toasting emerged from pagan rituals where practitioners would drink from a ritual cup that was filled with blood or wine and offer the rest as a gift to the Gods. The offering would be made as an exchange for wish fulfillment, such as good health, love and prosperity. Luckily, we now toast with more palatable options than animal blood.

Here, we’ve researched some important toasting traditions from eight countries so that when you’re on the road and someone raises a glass, you’ll feel confident raising your glass alongside them.

China The right and wrong way to toast in China

In China, it is customary to finish what was offered and get ready, because there’s more where that came from. Refusing a drink is considered rude, especially if you are a guest. Offering no drink is also considered rude, especially if you’re the host. Additionally, there are rules depending on your company. If you’re in the presence of someone older than yourself (a father or mother-in-law, for example) hold your glass below the level where the elder holds their glass. This is more of a traditional custom but good to keep in mind if you’re about to ‘meet the parents.’

Regardless of where you are, you will most likely be enjoying Baijiu during a toast. Never heard of it? No problem, it’s only the most consumed spirit in the world due to its popularity across China. Thought to have originated in the Chinese provinces of Sichuan and Guizhou, it is a clear spirit made from one or more of the following: Sorghum, wheat, rice or corn. Distilled since the 11th century, Baijiu means “white liquor”.

There is one serious rule when it comes to toasting in Japan: If you’re drinking with your boss, do not pour your own drinks. Pouring your own drink is a serious faux-pas.

If you desire to be exceedingly polite, make sure you angle the label towards your boss as you pour. Drinks in Japan are wide ranging, from ice-cold beers to piping hot sake. But if you’re drinking with your boss you may be consuming Shochu, an ancient clear distilled alcohol sometimes referred to as the “gentleman’s drink” in Japan.

Cheers: Kanpai!
Means: Empty the Glass, or, Bottoms up!

It is customary in South Korea to pour and accept alcohol with both hands. The right hand should hold the drink, the left hand should support the right hand by gently clutching the wrist. After saying “thank you” for the drink, it’s considered proper to clink the shot glass against the bottle. When drinking with elders, angle one’s face away to show respect.

For these toasts you may be enjoying Soju a clear colorless liquor made from rice, wheat or barley and enjoyed neat. Soju remains the most popular alcoholic beverage in Korea. 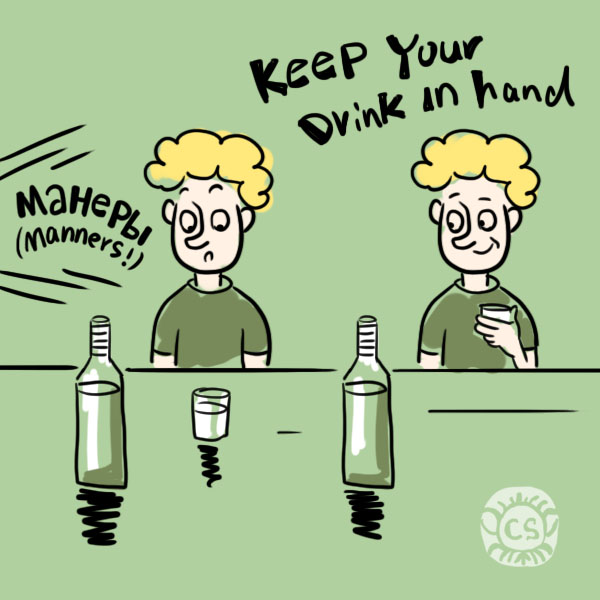 In Russia, the number one rule to remember is don’t put any glassware on the table. Glassware shouldn’t come close to the table surface, unless it was there before you began. When your shot of vodka is poured, you hold it in your hand until it’s finished. You can nurse it, but whatever you do, do not put it back down on the table. When your shot glass is empty, and the bottle is finished put all empty glassware underneath the table.
While Vodka is the undisputed champion of Russia, there are other spirits you may be toasting with such as Gorilka (a strong spirit similar to moonshine). 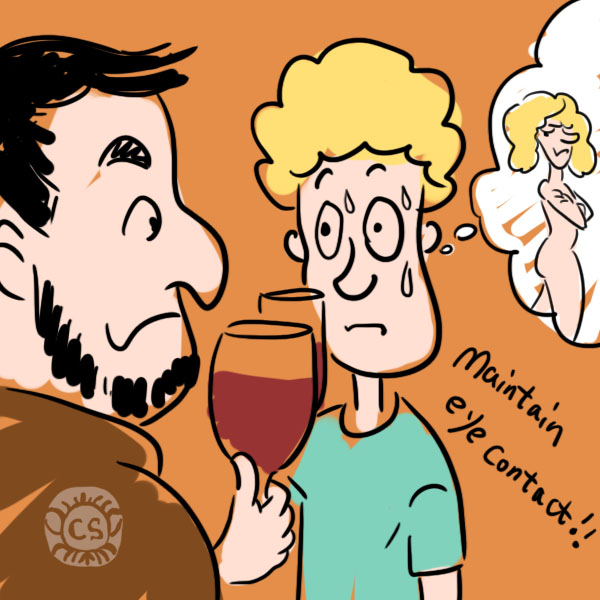 To your health…All of it!

In Italy, toasting is serious business with dire consequences if done incorrectly. You maintain eye contact when toasting. If you break eye contact, you’re cursed with seven years of bad sex. This tradition of keeping eye contact is prevalent throughout Europe and shared by countries such as Germany and France.
Since this is Italy you are undoubtedly cheering with some fabulous local wines. Or, you may be imbibing in one of the many famous Italian spirits, Amaretto, Campari, Lemoncello… to name a few.

Cheers: Cincin! Or, Saluti!
Means: Onomatopoeic sound for the clinking of glasses; or, to your health! 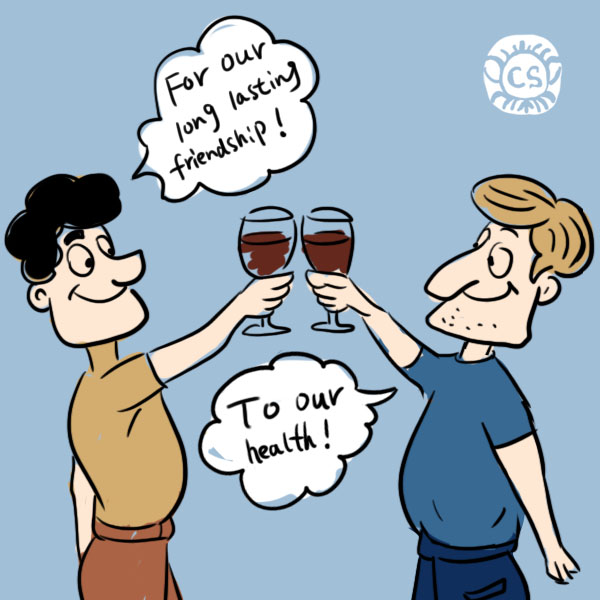 The only rule: never toast unless you mean it!

In Israel, the toasting rules are very simple: you should only toast if you mean it, and you only toast things that hold gravity: for good health, for a long marriage. You do not toast for your favorite team to win, or for good weather tomorrow.

Some options for a good cheers are Arak, another aniseed-based liquor, or else the hottest new beverage popular throughout the country, Tubi 60, a citrus based spirit using local herbs, fruits and spices. 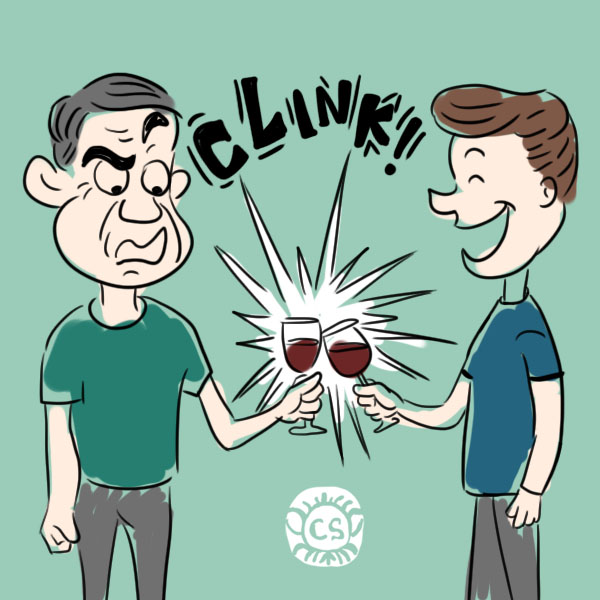 Clinking your glass can be considered very bad manners -depending on who you’re with.

Following the French Revolution of 1848, Hungary wanted a revolution of their own to separate from Austrian rule. Lead by thirteen generals, Hungarians rose up and took over most of Hungary. Before they could begin, Russia intervened to quash the revolution and the Austrian army executed the thirteen rebellious generals. So, how does this piece of history lead into the topic of toasts? Hungarian legend states that when the thirteen generals were executed, the Austrians soldiers cheered their deaths by clinking beerglasses together. For this reason, it’s considered very disrespectful to clink glasses during toasts in Hungary. This custom is more prevalent among the older Hungarians, while many of the younger generation believe enough time has passed and they can clink glasses without
disrespecting patriots.

Patriotic drinkers will likely be imbibing with Unicum, a herbal liqueur which is also the Hungarian National Beverage.

Cheers: Egészségére!
Means: For our health! 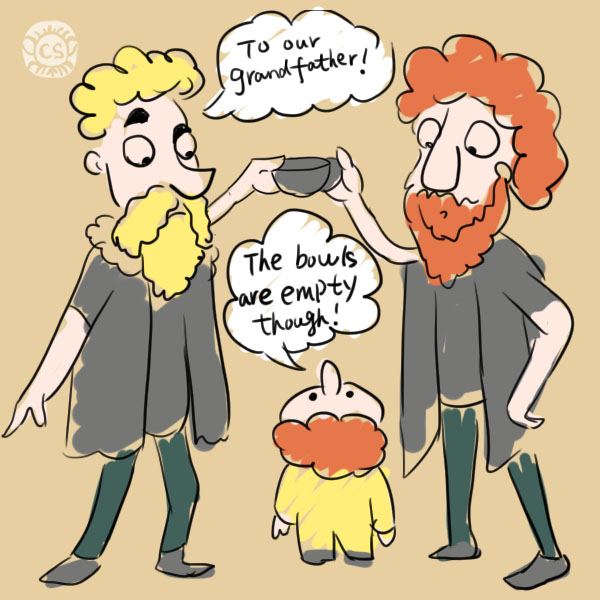 Like other Northern European countries, Iceland says “Skál!” to say cheers to one another while sharing a drink. The word has been etymologically traced back to the word “bowl”, which relates to an ancient Nordic tradition where people would drink from an empty bowl as a way of honoring someone no longer with them.

Now, people say Skál! and enjoy local delicacies, such as Brennivín a clear unsweetened schnapps which pairs with well with fermented Shark snacks. If you can handle it.